Shortly after the New Year rolls around, taxpayers experience the dread of tax season. April may seem far away, but the tax return deadline comes in the blink of an eye for the majority of us who wait to gather and submit our critical documents to the IRS. Whether it’s due to procrastination or downright avoidance, every year hundreds unfiled tax returns go neglected—but not without notice. If you have unfiled taxes, whatever the case may be, the IRS knows and will sooner or later come after you to collect what they’re owed (if they haven’t already). This post answers some insightful questions for those who are considering not filing a return this year, who failed to file tax returns in the past, or who are in desperate need of unfiled tax return help. Let’s take a look at the consequences and see what you could potentially stand to lose.

Is Not Filing a Tax Return Illegal? 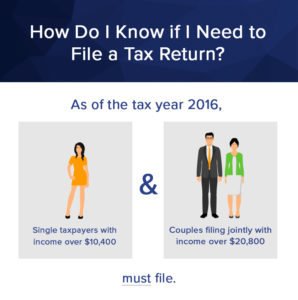 Yes, if you’re required to submit an income return to the IRS and fail to file, your unfiled taxes are considered a crime in the eyes of the law ever since the tax bill was passed within the 1913 Sixteenth Amendment. It states that “Congress shall have the power to lay and collect taxes on incomes, from whatever source derived…” and both federal and state agencies enforce “tax code” compliance. Not everyone is subject to the same requirement, however, as your tax obligation is based on:

Read up on the latest IRS tax return filing requirements to see if you’re safe with unfiled taxes. Generally speaking though, most adults with earned income are subject to tax codes, and by failing to file your tax return you subject yourself to a host of consequences.

What are the Penalties for Unfiled Tax Returns?

The first of your concerns is an IRS failure to file penalty: as of 2017, this fine is normally assessed at 5% of the amount due on your unpaid taxes for each month or portion of a month your taxes remain unfiled.

If you have an unfiled tax return and owe the IRS money, you’ll also face the failure to pay penalty: generally 0.5% per month of unpaid taxes, with a minimum fine of $135. As the interest and fees continue to pile up on your unfiled taxes from prior years, you’ll soon find yourself with a mounting tax debt and in the need of unfiled taxes help to settle your outstanding obligation.

Can I Face Criminal Charges for Unfiled Taxes?

In some cases, yes. The IRS is unlikely to prosecute a taxpayer who filed late, can’t afford to pay their tax bill, or accidentally reported misinformation. However, if you don’t file your taxes despite knowing an obligation to do so, you could be guilty of tax evasion—a criminal offense punishable by law. The punishment will vary depending on the severity of your crime, but in almost all cases someone charged with tax evasion will require a tax advocate or tax attorney to represent them before a court.

What if the IRS Owes Me Money?

If you’re owed a return due to eligible tax credits or from withholding extra allowances on your Form W-2, an unfiled tax return could cause you to lose out on any money heading your way. If you leave your taxes unfiled, the IRS will likely just keep your scheduled return—which benefits them but works against your favor, especially if you were expecting to see a large return. As of 2017, the IRS states that you have up to three years to request a former return, so be sure to settle your unfiled tax returns as soon as possible.

I Have Unfiled Tax Returns But Haven’t Heard from the IRS — Am I Okay?

No, just because the IRS has not contacted you regarding your unfiled taxes does not mean you’re not on their radar. April is the busy tax season, but IRS officers have all year long to review unfiled tax returns. Just because they’re prioritizing the big fish doesn’t mean they won’t also go after the small guys, too. You might not have filed an income tax return for years, only to one day suddenly receive a notice stating your shockingly high tax debt and finding yourself in desperate need of unfiled tax return help. This is because the IRS technically has an unrestricted amount of time to investigate your account for as long as you fail to file. The good news is that once you do correct your outstanding taxes, you start the clock on the unfiled tax return statute of limitations. The IRS statute of limitations states that generally speaking, the government has up to ten years to collect on a debt for your unfiled tax return. If you’ve been sitting on back taxes for years, the time frame constraining the IRS has not yet started, giving them an endless amount of time to sit on your case. File your taxes immediately to start the window of unfiled tax return statute of limitations and narrow the timeframe the government has to collect on you.

How Can I Resolve My Unfiled Taxes?

The good news is that IRS amnesty for unfiled returns is available to taxpayers to settle their account and clear their names. There are many IRS amnesty unfiled return programs, and your best bet is to find trusted unfiled tax return help, but the two most common options are:

The professionals at Community Tax are your best bet for resolving and correcting your unfiled tax returns. Negotiating with IRS agents can be confusing and intimidating, and leaving your tax debt unresolved might lead to wage garnishment and a bevy of other consequences. Rely on us for all of your tax related needs, whether it’s for IRS back tax help or tax preparation services, and see why over 50,000 trust us over the leading competition.