If you’re a working American, you need to file taxes no matter where you live. IRS Form 2555-EZ can be used by qualifying taxpayers who would otherwise have to use IRS Form 2555 to exclude part of their earned foreign income from IRS Form 1040. To be able to use IRS Form 2555-EZ, a taxpayer has to live outside of the U.S. for a full tax year, beginning January 1 to December 31, or be from a country with an income tax treaty with the U.S.

Taxpayers filing for 2020 may be eligible to exclude up to $107,600 of their earned foreign income by filing IRS Form 2555-EZ, although the self-employment taxes must still be paid. Let’s go over everything you need to know about filing the 2555-EZ.

If you’re an expat, the Form 2555-EZ Foreign Earned Income Exclusion (FEIE) allows you to exclude $107,600 of foreign earned income from your 2020 U.S. expat taxes and $105,900 from your 2019 expat taxes. Each year, the FEIE goes up to take inflation into account. You can check the exclusion amount for prior years on the IRS website. It’s important to remember that this exclusion is not automatic, so make sure you attach Form 2555-EZ to your regular tax return (Form 1040). 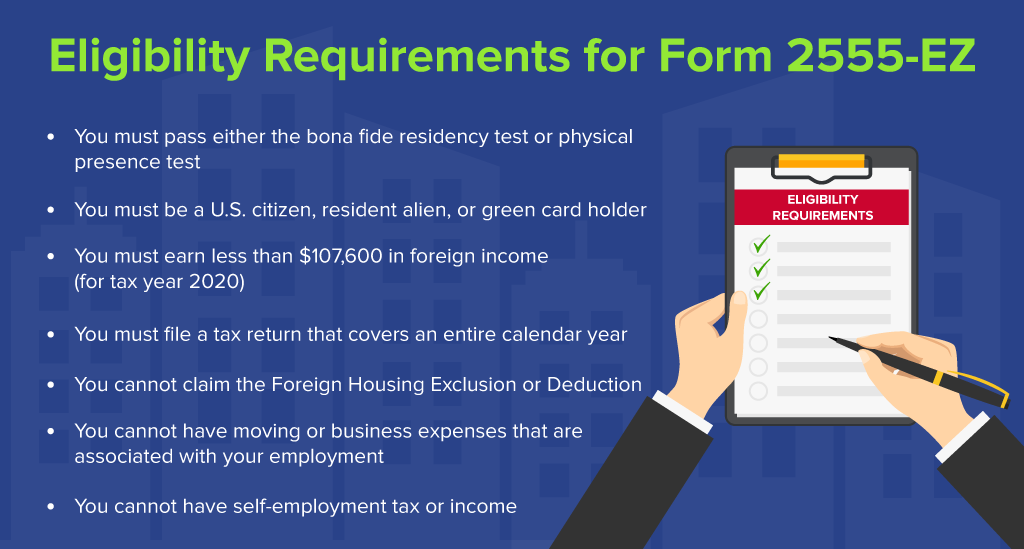 You must prove to the IRS that you lived in a foreign country in order to be eligible for the FEIE. This is done by passing one of two tests:

Along with these two tests, you must pass the Tax Home Test. To pass this test, you must prove your tax home was in a foreign country or countries throughout your period of bona fide residence or physical presence.

If you’ve been researching Form 2555-EZ to pay your U.S. expat taxes, you may have come across Form 2555. So you may be wondering, is there a difference, and which one should you complete?

While you may think the EZ in Form 2555-EZ stands for something, it actually stands for what it sounds like—easy! Form 2555-EZ is a simpler version of Form 2555 to file your U.S. expat taxes. Let’s dive into an example to tell the difference.

As we previously stated, in 2020, you can exclude up to $107,600 of foreign earned income from your U.S. tax return. Let’s say, for example, you work for a business and your salary is $120,600. Your salary is $13,000 over the exclusion amount, which means you will owe taxes on that difference. With Form 2555, however, you also have the ability to reduce your U.S. tax liability by including your foreign housing costs, meaning you may not need to pay as many taxes on that $13,000.

To complete Form 2555-EZ and qualify for the FEIE, you must meet specific criteria. You can refer to the list below, or use the IRS’s Interactive Tax Assistant to determine whether your foreign earned income is eligible for exclusion. You must:

Along with these criteria, you cannot:

Now that you know what Form 2555-EZ is and the difference between this form and Form 2555, it’s time to fill it out. To complete Form 2555-EZ, you will need the following information readily available:

Once you have this information on hand, you can begin completing IRS Form 2555-EZ. Or, if you need help and want to ensure you accurately complete this form, our tax professionals at Community Tax are ready to assist you.

Enter your information to get started.