If you work for a large company that issues a W-2 when tax season rolls around, it’s not likely that you can falsify your income. However, it’s not uncommon for tax scammers to claim they can boost your return by falsifying your income. In addition to scammers, there are a number of individuals and business owners who make false claims on their taxes in order to get a bigger return. Despite the enticing appeal, tax fraud can come with severe consequences. 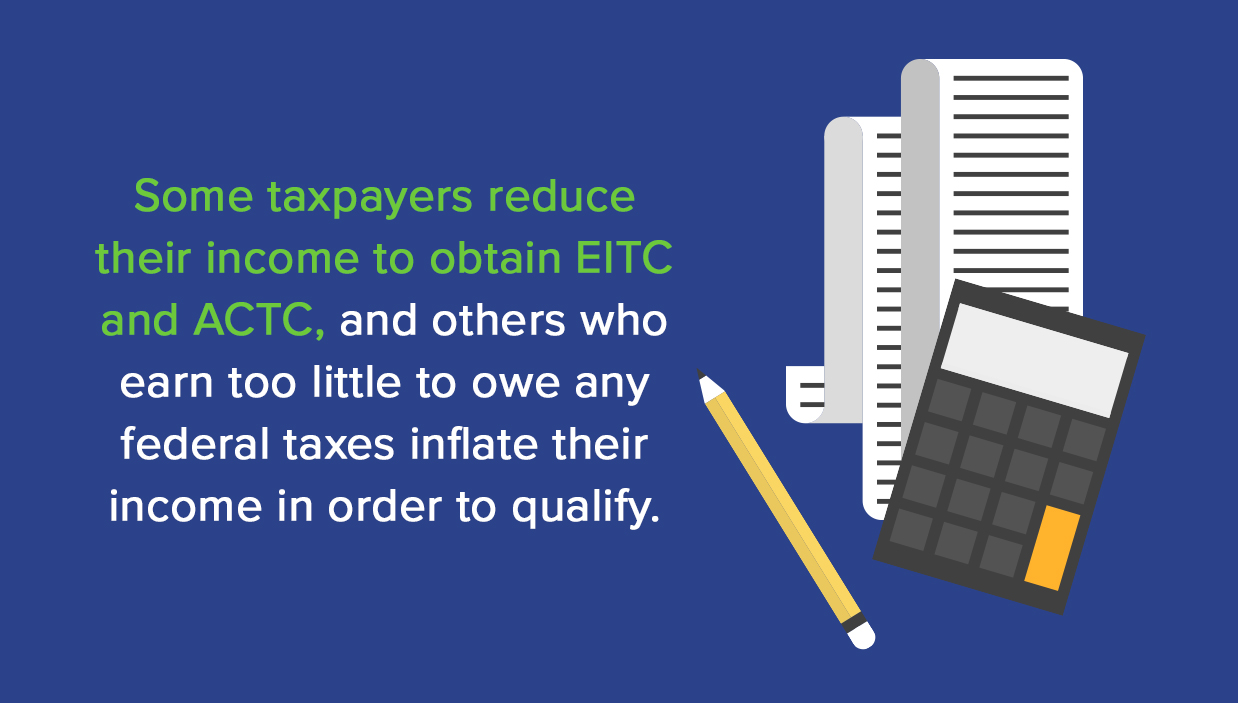 Hopefully, you aren’t trying to falsify your income on your taxes—but that doesn’t mean it still can’t happen. Earned income tax credit fraud schemes usually take advantage of the fake Forms 1099-MISC. Scammers provide fraudulent Form(s) 1099-MISC that appear to be issued by a large bank or loan service that a taxpayer has a financial relationship with. The IRS cautions taxpayers to avoid becoming the victim of schemes disguised as “debt payment” option for credit cards or mortgages. By falsifying your income, scammers can take a bigger cut of the return, and the consequences fall on your shoulders.

Having children qualifies you for a number of different tax credits. You can receive a break on your taxes for things like daycare, school, and medical bills. However, claiming a false dependent can lead to a number of penalties and potential criminal charges. The $1,000-per-child tax credit is among the governments biggest tax breaks for working families. Because it dishes out almost 6 billion dollars every year, the IRS is likely to increase its already scrupulous accounting of these claims. Because the child tax credit is refundable, the taxpayer can get cash back if they don’t owe taxes—this is one of the many reasons people try to take advantage.

If the IRS decides that you knowingly and fraudulently filed for a child tax credit, they can impose civil fraud penalties on your return. The penalty for civil tax credit fraud is 75% of your income underpayment for your income tax. That means if you underpaid by $5,000 you would be expected to pay the initial $5,000 and an additional 75% ($3,750).

How to Avoid Fraudulent Charges

The IRS understands that people make mistakes on their tax returns and not everyone is intentionally claiming tax credits fraudulently—that doesn’t mean you still can’t face consequences. If you’re concerned about committing tax credit fraud, here are some ways to avoid it:

Supply documentation: The IRS isn’t likely to come after you if you give them documented proof to back up any claims you make. In some cases, you may even be able to avoid penalties by doing so; this strategy is especially helpful when avoiding benefit fraud.

Hire a legitimate tax representative: If you are hiring a tax company whose name you don’t recognize or isn’t listed on the BBB (Better Business Bureau), ask for a tax representative ID number that you can cross reference on the IRS website.

Don’t lie: As tempting as it might be to pad your taxes or add tax credits you don’t qualify for, it’s not worth the risk. The savings from claiming tax credits fraudulently pale in comparison to the legal and financial consequences.

What Should I do if the IRS has Notified me of Tax Credit Fraud?

Don’t panic! If you are being audited by the IRS, there is less than a 25% percent chance that you will actually have to pay any taxes. The best thing to do is to hire a qualified and experienced tax professional who can guide you through the process. Gather any and all evidence you have to support the claims you’ve made on your taxes that the IRS has flagged and comply any way you can.

If you are concerned with claiming tax credits fraudulently or the IRS has issued an audit, don’t hesitate to call Community Tax today. Our qualified professionals are standing by to answer any questions you might have regarding your taxes.