When disaster strikes, many people rise to the occasion and offer whatever kind of financial help they can. Sadly, there are charity scammers waiting for such an opportunity to manifest so that they can try to take advantage of people’s kindness. In addition to the fake charities that function year-round, thousands can pop up as soon as the announcement of a natural disaster is made. Fundraisers have been known to send out thousands of spam messages via Facebook, email, and Twitter in order to dupe their participants. When the internet is flooded with calls for help and incentives to donate to a relief fund or a non-profit, it can be difficult to tell fact from fiction. 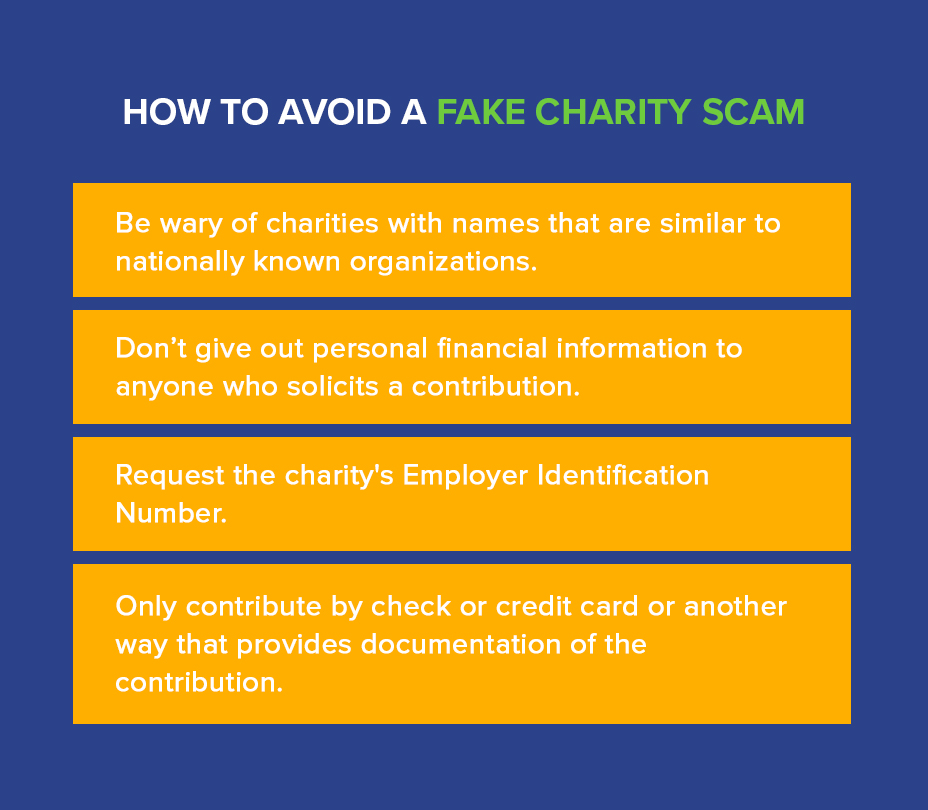 How to Recognize a Fake Charity

Before engaging in the noble cause of donating to a charity, make sure you do your research. Organizations like Goodwill and the Red Cross are recognizable and established entities that you won’t need to vet. However, when you see an unfamiliar organization, whether it be global or local, you need to do a little investigating to make sure they’re accredited and won’t steal your money. Fortunately, there are a number of websites that allow you to vet most nonprofit organizations. Wise Giving Alliance, Charity Watch, and GuideStar are just a few resources that can be used to gage the credibility of a charity. In addition to using vetting tools, there are some telltale signs of charity scams you need to be aware of: 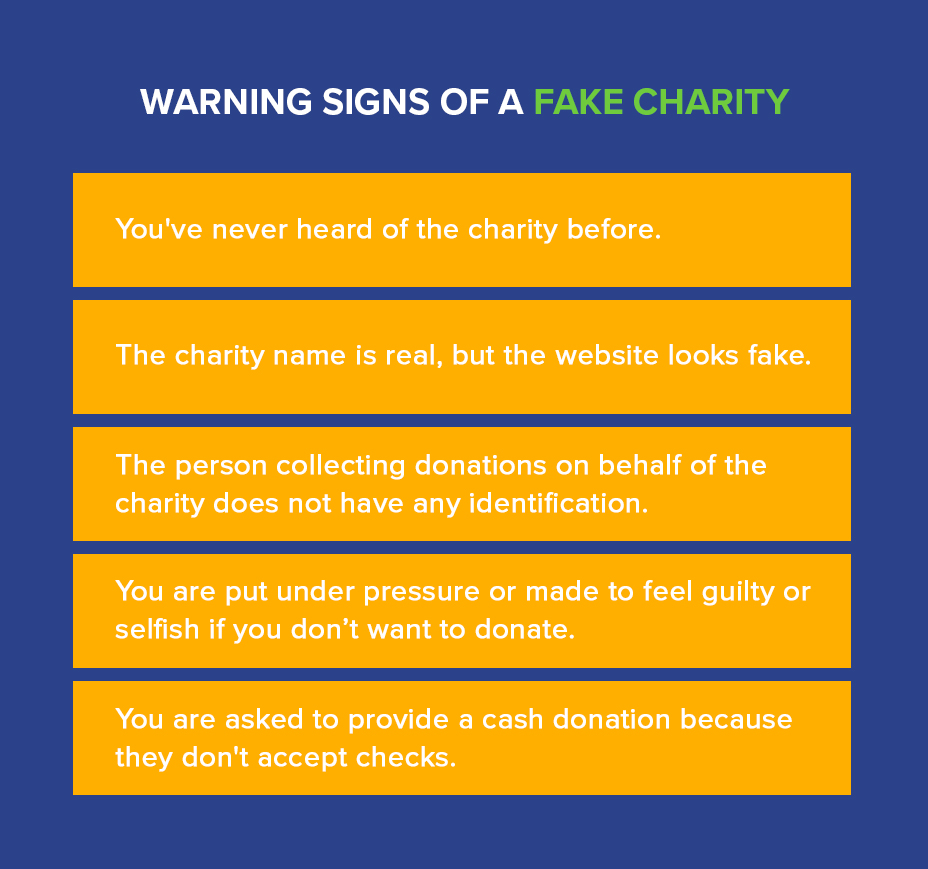 How to Report a Fake Charity

If you discover or fall victim to a charity scam, it’s extremely important that you report it as soon as possible. The IRS constantly warns taxpayers to be weary of fake charity organizations that offer enticing deductions—they even compile a list of charity scams and fake nonprofit organizations known as the Dzdirty dozendz each year. It’s important that you know how to report a fake charity scam in case you ever fall victim to fraud. The responsible thing to do is identify the fraudulent entity, gather evidence, and report it to the police. There are two types of charity frauds which you may identify: Once you’ve identified the type of fraud, gather as much evidence as possible and take your findings to the police. As long as the police have enough evidence, they will take action against fake charity scams.

What Should I do if I Donate to a Fake Charity?

If you’ve made the mistake of donating to fake charities, don’t be embarrassed—it happens to the best of us. The first thing you should do is make sure that your identity won’t be stolen. Contact your bank immediately; check for any fraudulent charges on your credit card and notify them that you have made a donation to a fake charity organization. If the donation was made recently enough, you may be able to cancel the check or payment to prevent them from stealing your money. The next important step is to contact the IRS; if you’ve made donations to fake charities and written them off on your taxes, you could be liable for an audit. The smart move is to contact a tax professional who can sort out any misunderstanding you might have with the IRS. In a worst-case scenario, the IRS could accuse you of knowingly donating to a fake charity in order to cheat on your taxes. However, the help of a tax professional can more than likely prevent something like an audit from happening. The first step in defending yourself is to gather any and all documentation you have in your dealings with a fraudulent charity organization. This can be difficult because fake charities are usually smart enough to cover their tracks. If you don’t have receipts for your donations, contact your bank and gather any documentation they can provide. The IRS tends to be forgiving of those who fall victim to fake charities, but it’s always safest to seek professional help to avoid an audit or further troubles. If you’ve been the victim of a fake nonprofit organization, contact Community Tax today. We have helped thousands of businesses and individuals overcome a wide variety of tax problems. Our qualified professionals are standing by to answer any questions you might have regarding fake charity donations and the IRS tax deductions. Don’t wait until the IRS is sending you letters in the mail or initiating an audit, call community tax today.