Somehow in life’s chaos you neglected to file your taxes and have been slapped with a failure to file penalty. Maybe you forgot, or maybe your W-2 came late. Maybe you didn’t know how seriously the IRS takes filing taxes late, or perhaps you’re a newly minted student unaware of your taxation responsibility. Whatever the reason was, the penalty for filing taxes late probably has you freaking out. We’re here to help you handle your failure to file penalty, teach you what it is, and show you what you can do about it. First, let’s break down a few different types of the most common tax returns to see how they might affect a failure to file penalty.

Single or Head of Household Returns

Most students will file as Single on their tax returns. It’s the basic filing status for unmarried people who do not qualify to file as Head of Household (HOH). For the HOH status, you must meet these three requirements: you were not married on the last day of the tax year; you paid more than half the cost of ‘keeping up a home’ for the year; a ‘qualifying person’ lived with you in that home for more than half the year except for temporary absences (note that a dependent parent is not required to live with you). The HOH status has some hefty tax advantages over the Single status, such as lower rates and a higher standard deduction, so whether you’re filing taxes late or on time, check if you qualify.

Statistically, many single parents file for HOH. During times of financial hardship, it’s important to file taxes even if you can’t pay them. Generally, a failure to pay penalty is ten times smaller than a failure to file penalty, so it’s cheaper to file even if you don’t have the funds. If you can’t pay your taxes in full, the IRS will work with you to help resolve your tax debt. Most people can set up an installment agreement with the IRS using the Online Payment Agreement tool on IRS.gov.

If you were married on December 31st of the tax year, you must file your tax return under the Married status. You have the option to choose between Married Filing Jointly and Married Filing Separately. The IRS strongly encourages most couples to file jointly by extending several tax breaks to those who file together. Joint filers receive one of the largest standard deductions each year, and they can usually deduct two exemption amounts from their income. They also might qualify more easily for various tax breaks including: Earned Income Tax credit, American Opportunity and Lifetime Learning education tax credits, Exclusion or credit for adoption expenses, and Child and Dependent Care tax credits. Note that only one signature on the Form 1040 will result in a penalty for not filing taxes properly, so to avoid delinquency status, be sure that both people sign when filing jointly. When filing taxes late, both parties will be legally responsible for the failure to file penalty.

Most couples will file their taxes jointly, combining incomes and sharing deductions, but it’s not always the best idea. If one spouse uses questionable tax-filing techniques, the other partner might be wise to insist on separate returns. As previously mentioned, the IRS holds both people within a joint return equally liable for any problems that arise later. Alternatively, if your spouse is late filing taxes separately, you won’t be held accountable for their failure to file penalty. 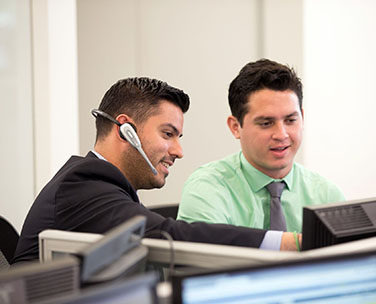 Receive a failure to file penalty? Not sure what to do next?

Regardless of your age, occupation, or marital status, if your income exceeds a certain level and you’re under the 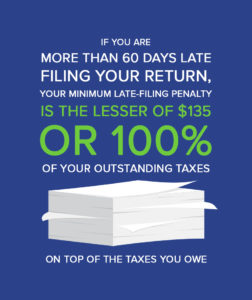 age of 65, you will need to file a federal tax return. If you are due a refund and the government owes you money, there is no penalty for not filing taxes. Keep in mind, though, if you don’t file a tax return within three years, you forfeit all refunds and/or credits owed to you. However, if you do owe the government money and forget to file, there can be significant consequences. If you were late filing your taxes, the first thing you should do immediately is file for an extension. The IRS will give an automatic six month extension to file your return, but you have to ask. If you owe money on your taxes, you’ll still need to pay it by the due date or risk interest charges, but at least you won’t receive a penalty for filing taxes late. A ‘failure to file’ penalty is generally much costlier than a ‘failure to pay’ penalty and can rack up to 25 percent of the taxes you owe. Failure to file a tax return on time will result in a late-filing penalty equal to 5 percent of the taxes you owe for each month, or part of a month, you’re late for up to five months. If you are more than 60 days late filing your return, your minimum late-filing penalty is the smaller of $135 or 100 percent of your outstanding taxes—plus you still have to pay the taxes.

If you were already hit with a failure to file penalty, and have a good reason late filing, you can write an abatement letter to the IRS. The IRS might waive penalties for reasonable causes such as death, serious illness, or other serious medical conditions. This applies to both the individual taxpayer and his or her family members. The IRS will typically look at four factors when considering penalty abatement:

Teenagers working part-time jobs during high school probably coordinated their tax-filings with their parents, if at all. But once people turn 18, move out, and head off to college, they’re often faced with their first tax filing experience. Tax season can be intimidating even for seasoned pros, so it’s safe to assume it strikes fear into the hearts of first-timers. They might have heard their parents or media complain about the headache of taxes, and are finally realizing just how tricky and stressful it can be. If you are an unmarried, dependent student, you are required to file a return if you meet any of the following conditions (as of 2016): unearned income was more than $1,050; earned income was more than $6,300; gross income was more than $1,050. Note that students under the age of 24 are always dependents on their parents’ tax returns. If a student doesn’t meet these conditions, they won’t incur a failure to pay penalty, because they aren’t obligated to file a tax return.

However, just because they don’t have to, doesn’t mean they shouldn’t. Students can benefit from filing a tax return by receiving refunds or credits. If they were employed, and had part of their earned income withheld, they might have overpaid and can receive a tax refund. Additionally, students can accumulate tax reimbursements of up to $2,500 for tuition, books, and supplies. They also might be able to claim a deduction for student loan interest. In this case, they should file an extension if they failed to meet the April 18th deadline. Students who do not owe the IRS anything won’t receive a penalty for filing their taxes late. If a student’s income exceeds the limit, and they are filing taxes late, they will likely incur a penalty.

Owe back taxes to the IRS?

We can help you properly file your back taxes and get your finances back on track. CONTACT US TODAY 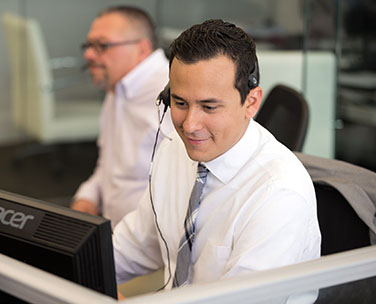 There’s nothing wrong with asking for due sympathy from the IRS when referring to your failure to file a tax return. However, if you don’t have a reasonable explanation for filing taxes late, it’s important to file back taxes. Besides squaring up with the federal government, getting up to date on your taxes has a few other benefits. You’ll get access to loans and aid which require copies of tax return for application. Furthermore, if you file your tax return, it will act as an investment in any future payments you might be entitled to through social security, disability, unemployment, or Medicare. As of 2016, the IRS has six years to audit you from the time you last filed. The sooner you file your previous years’ returns, the quicker you start the clock of statute of limitations. Use Community Tax for help with your taxes and to assist in clearing your failure to file penalty.