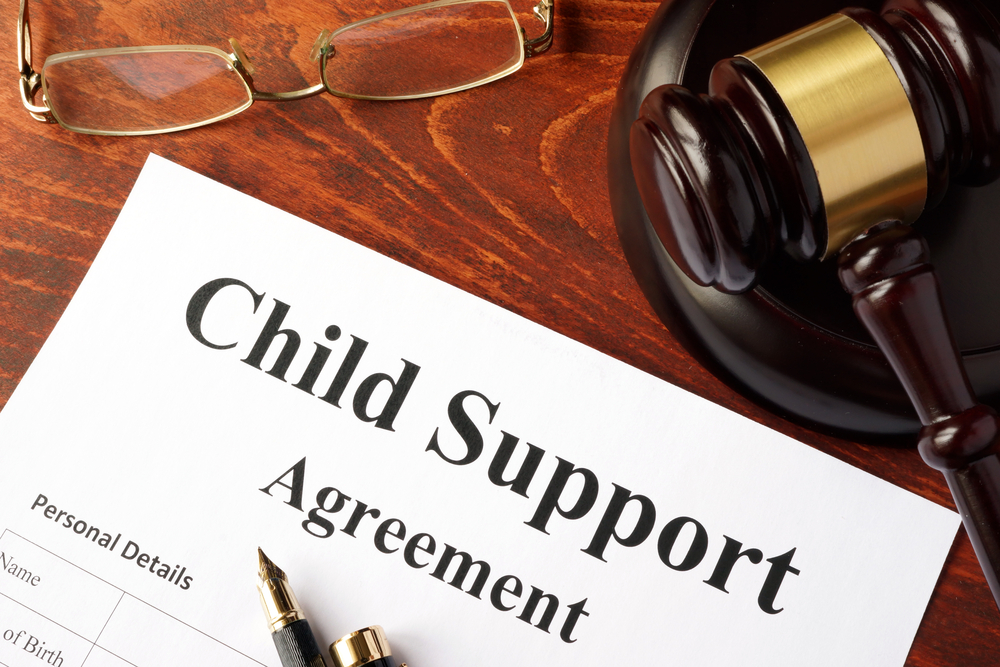 Child support payments are not tax-deductible. However, you may be able to claim the child as a dependent. When you’ve claimed a dependent, you’re able to take advantage of greater tax deductions and withholdings. According to the IRS, the parent with whom the child lived with for most of the year is the custodial parent, for federal tax purposes. The custodial parent can claim the child as a dependent on their tax return, so long as the child is an eligible dependent. But you can also claim the child as a dependent if you’re a noncustodial parent. This might be a good option for you if you’re divorced, separated, or live separately from your spouse. Here’s what you’ve got to do in this scenario: This would be a very beneficial thing to do if you’re the one who’s providing most of the financial support for the child—maybe the custodial parent can only afford to pay for basic living expenses like rent and utilities. If you’re the one who’s providing most of the money to feed, clothe, and educate the child, it makes sense that you should be the recipient of tax deductions that make it easier for you to continue providing support. You don’t need child support payments—in the legal definition of the word—to get tax deductions. In many cases, you only need to provide most of the financial support for a dependent.

There are lots of benefits that come from claiming a dependent on your tax return. The two main benefits are that you can earn larger tax deductions and that you’ll get more withholdings to claim on your Form W-4.

When you’re taking care of a dependent, you’ll be eligible for certain tax breaks that should make it easier for you to keep supporting the dependent. We’ll go over a few of these tax breaks a little later on in this post.

When you claim a dependent, you’re also able to claim more tax withholdings. Here’s a quick run-down on tax withholdings if you need a refresher. The IRS collects income tax from you every year. Sometimes, it winds up being a pretty large sum, and so your employer automatically removes some of your tax obligations from each paycheck and pays it to the IRS. If you don’t elect any tax withholdings, your employer will withhold a larger amount of money—which means you’ll get a larger tax refund, but your paychecks will be less throughout the year. Typically, you can get one additional tax withholding per dependent. When you claim a tax withholding, you’re able to keep more money in your paychecks all year. Obviously, that’ll give you some extra money each month to pay for your dependent’s expenses. Pro Tip: Update your W-2 after every major life event, like when you have a child, earn a significant pay raise, or make a large investment.

Tax Deductions for Having Dependents

Let’s talk about a few of the tax deductions that you might be eligible for if you’ve claimed a dependent.

Most adults have a job of some sort, and it can be awfully difficult to take care of your child when you’re working. For that reason, many parents sign up their children for daycare or summer camps, or they routinely hire a babysitter. You might be able to claim the Child and Dependent Care Credit if you paid for childcare for children under the age of 13. The credit allows you to claim 35% of your childcare expenses up to:

The Earned Income Tax Credit (EITC) is a tax break for workers who earn low to moderate-income. Here’s the tax credit you could earn for 2019:

The 2017 Tax Cuts and Jobs Act nearly doubled the standard deduction, and so you might receive a larger tax break if you choose the standard deduction than if you itemize your deductions. However, if you’re eligible for numerous tax deductions it might still be better for you to itemize. We strongly recommend consulting a professional tax service, like Community Tax. A tax preparer can help you determine whether you can save more money on your standard deduction or by itemizing. 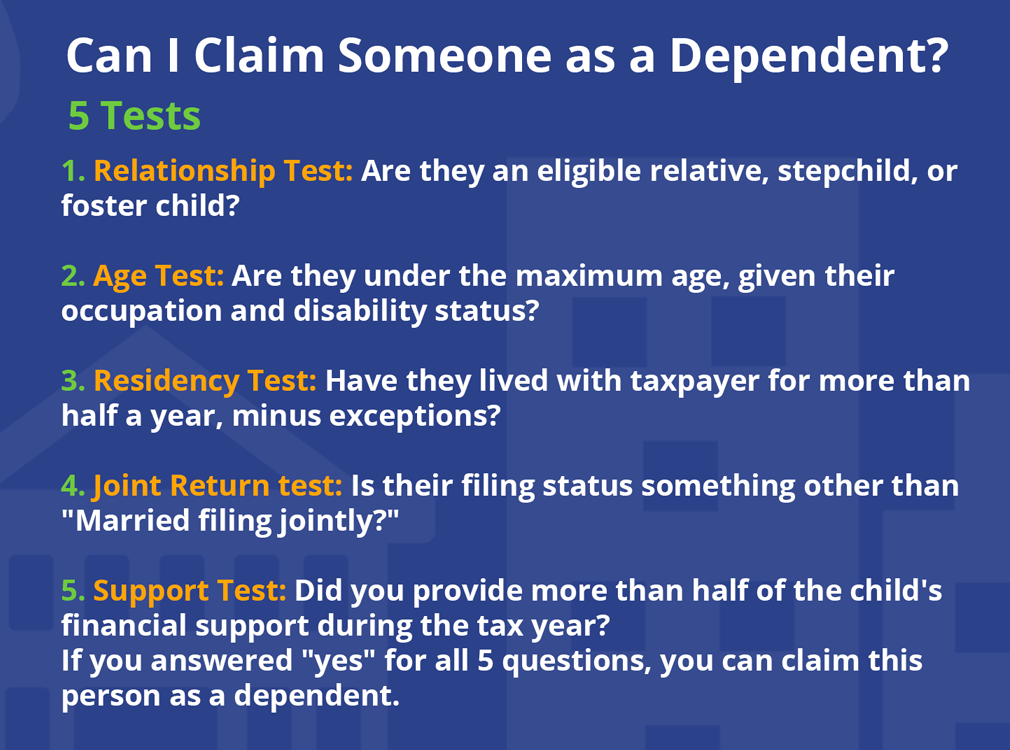 When Can I Claim Someone as a Dependent?

In order to claim someone as a dependent, there are 5 criteria that must be met:

The person you want to claim as a dependent must be a: Any family relationship that’s established by marriage, so you can claim a dependent that’s blood-related to your spouse. These relationships aren’t made void by divorce, either.

The person you want to claim as a dependent must meet certain age requirements, too:

The person you want to claim as a dependent must have lived with the taxpayer for more than a year. It doesn’t matter where you both live! Residency with you includes stays in: There are some important exceptions to this rule. It’s okay for the child to be absent due to: What if a child is born or has died during the tax year? If the taxpayer’s home was the child’s home for more than half a year, then you’re able to claim the child as a dependent. But the IRS does not allow taxpayers to claim a deceased child as a dependent.

You can’t claim anyone as a dependent who’s married and filing a joint return. This is important to remember if: In the latter situation, you might advise your dependent and their spouse to file their tax returns as “married filing separately” so you’re able to maintain your dependent.

To claim someone as a dependent, you must have provided more than half of his or her financial support during the tax year. The child can earn a significant amount of money and still remain as your dependent so long as the child doesn’t use the money for his or her own support. Let’s say your child goes into modeling and earns $60,000 during the tax year. So long as the child puts that money into savings and you don’t use it to pay for living expenses, you can still claim the child as a dependent. State benefits, like welfare and food stamps, are not considered “support funds.”

What if I’m Taking Care of Someone Who has a Child?

If you’re caring for someone who has a child, you may be able to claim that person as a dependent. They must pass two tests:

In addition to meeting the support test requirements, this person must also be an eligible relative.

Who Can Claim Head of Household? 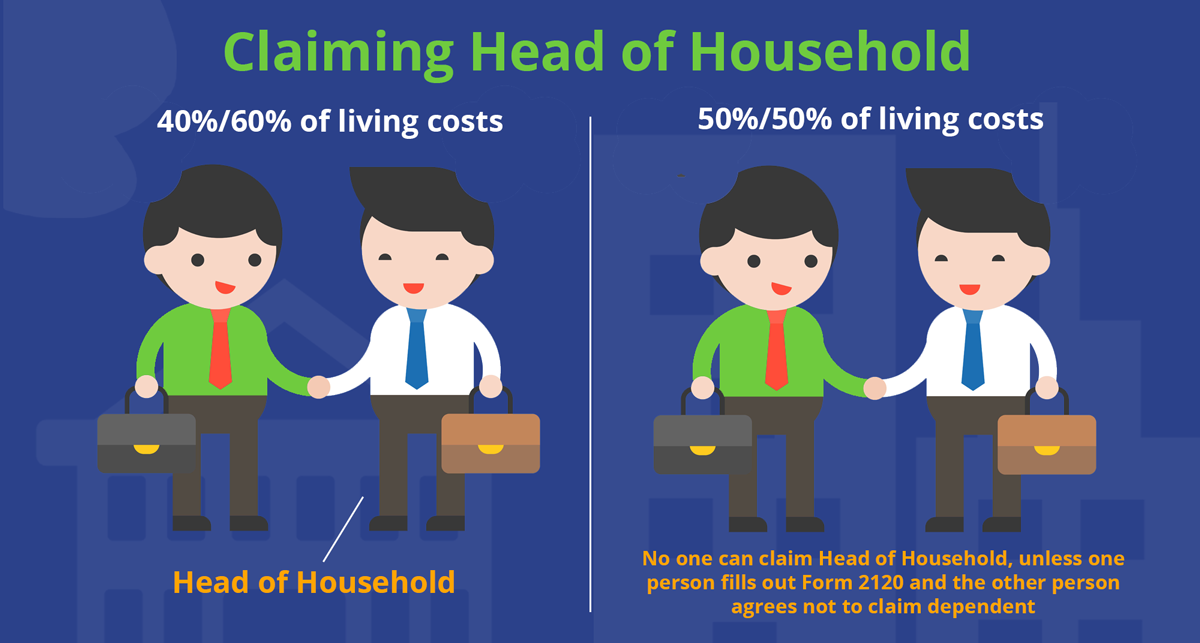 If you and the other parent plan on splitting child support costs equally, then one of you may be able to claim the dependent and earn tax benefits. If you’re claiming the dependent, you’ll have to fill out Form 2120 (Multiple Support Declaration). The other parent needs to provide a written and signed statement to the IRS agreeing not to claim the dependent for the year. Who should claim the dependent? Ideally, the parent with the highest income should claim the dependent because they could earn more tax relief. And that’s where there’s a moral gray area: if you provide custodial support for a child, shouldn’t you be able to claim the child as a dependent and not someone who’s merely providing financial support? Perhaps, but if another parent is proving most of the financial support, it might be wiser to let that parent earn tax deductions to make it easier for them to keep providing it. If you’re in that kind of situation, consult with a tax preparation service to help you make the right financial decisions for your child.